From the Western scientific point of view, immunity is the ability of the body to defend itself against harmful substances (antigens), which can come from both the external environment and the environment inside the body.

The immune system consists of leukocytes (white blood cells), lymphatic organs such as the thymus and bone marrow, where lymphocytes (a type of white blood cell) are formed, as well as lymph nodes, spleen and lymphatic tissues that capture antigens. Today, immunology is one of the fastest growing branches of modern biology.

If we want to have a look at the knowledge of the Ayurvedic medicine, we will discover that immunity means more to it than just resistance. It is the deepest essence of the life energy of the body, which not only protects man on a physical, mental and spiritual level, but also rejuvenates the body and enhance longevity and inner fulfillment.

The Basis of Immunity is Psychosomatic Balance

The basic and first prerequisite for healthy immunity is the balance of the three life bioenergies (dosha) vata, pitta and kapha. Each person is born with a unique ratio of these three energies, which are associated with the five elements (vata - air & ether, pitta - fire & water, kapha - earth & water). This original initial setting, which determines our physical appearance as well as mental tendencies and inclinations, arises at the time of conception according to the ratio of dosha in the female egg and male sperm and is called prakrti. Due to external and internal factors, this balance and the original dosha ratio deviate during life and the current state or vikrti is formed.

If we live in harmony with our unique characteristics and follow a suitable and healthy lifestyle, eat properly and cultivate healthy interpersonal relationships, a balanced ratio of dosha will properly influence and shape the physiological functions and metabolism of the body, including mental and psychic health. As a result, the tissues of the human body will be regularly and sufficiently nourished, and at the very end of the body's process of nourishment, the sacred power of immunity will be formed, which, according to Ayurveda, consists of the three subtle energies of ojas, tejas and prana.

7 Bodily Tissues - the Nutrition of the Body

Therefore, if we understand our natural constitution and treat our body in accordance to it, a stable metabolism based on a healthy level of digestive fire (agni) will be able to transform food and perceptions coming from outside into functional and building elements of our body.

Ayurveda distinguishes 7 bodily tissues (dhatus), which form the human body. From the food you eat, a colorless fluid called plasma (rasa) is formed after the first five days, from which blood (rakta) is formed after another five days, from which muscles (mamsa) are formed after five days, then fatty tissue (meda), bones and joints (asthi), from the bone marrow then the nerve tissue (majja) and finally, after another five days, male and female reproductive tissue (shukra/arthava). The whole process of nourishment takes 35 days, after which the ojas, the subtle vital essence of these seven body tissues, is formed.

The Subtle Substances of Immunity - Ojas, Tejas and Prana

Ojas, tejas and prana are the finer essences of the three biological energies (dosha) vata, pitta and kapha and should correspond to their optimal ratio according to the individual prakrti.

Ojas - the Deepest Principle of Immunity

Ojas is a living protoplasmic substance that is the basis of the physical immunity of every cell and protects the integrity of the individual. It is formed from the last (reproductive) tissue of the shukra/arthava and contains all five basic elements. It passes through the heart, circulates around the body and maintains the natural resistance of all tissues. Ojas contains also numerous hormones and therefore, ojas maintains hormonal balance. If the flow of ojas around the body stops, the body is considerably weakened. He who has a strong ojas rarely falls ill.

Excessive stimulation of the senses and activity of intimate life, intense frustration, hectic lifestyle and stress weaken the ojas, and this allows negative energies to more easily pass into our system and create disharmony. The weaker the ojas, the less resistance we have to stress factors. If the strength of the digestive fire (agni) is also insufficient, then there is an excessive accumulation of toxins, which weaken the formation of this essence and thus reduce the resistance of the immune system. Reduced ojas also results in chest pain, palpitation, breathlessness, dehydration, loss of muscle mass, osteoporosis, and cancer.

At the psychological level, ojas brings the ability of compassion, love, peace and creativity. Meditation and breathing exercises (pranayama) strengthen the power of ojas and transform it into spiritual energy, which creates aura. This state of mental calmness without judgment, demand or stress brings mental stability, energizes the body and awakens the strength of the soul. A person with a strong ojas has bright eyes, a soothing smile and a strong immunity.

Tejas - the Principle of Biological Intelligence

Tejas is the energy of the biological intelligence of every cell in the body. It represents inner brightness and outer radiance. It is a burning flame of inner light, warmth, digestion, metabolism, intelligence, movement and the dynamic energy of human life. On the outer level, it represents the warmth and radiance of the sun.

Tejas controls the metabolism through an enzymatic system and directs the conversion of nutritional components into fine tissues. In essence, it is also an energy substance of a heat-treated food, which is softer, lighter and for the digestive fire easier to digest. Warm water has a cleansing and detoxifying effect on digestion. Cold water creates toxins and weakens the digestive process. For this reason, obtaining the three essences of life (ojas, tejas and prana) from a raw diet alone is much more difficult.

Lack of tejas leads to overproduction of unhealthy tissue, which causes tumors to grow and prevents the flow of pranic energy. Hot, sharp and pungent substances or unhealthy lifestyle and the use of harmful substances disproportionately increase tejas, which results in burning and loss of ojas.

On the spiritual level, tejas is the burning flame of pure intelligence, which needs to be kept clear through a pure mind, an open heart, and a harmonious life. Thanks to tejas, one can experience the power of one's inner light.

Prana is the leading life energy responsible for the functioning of the respiratory and circulatory systems, along with the musculoskeletal system and sensory functions of the body. It is the driving force of higher brain activity (memory, thinking, emotions), the cardiovascular system, especially the activity of the heart, and the oxygenation of body tissues and individual cells. Pranic energy also ignites central body fire (agni).

Prana controls the biological functions of both ojas and tejas. We receive it from the atmosphere, food and water. It enters into us immediately by breathing and it is replenished through diet and fluids on the basis of absorption, especially in the small intestine and colon. If the lungs and intestinal tract are weakened, the body cannot receive enough prana and a person loses vital energy.

Breath affects the harmonious relation between rational masculine and intuitive feminine energy in the form of alternating inhaling and exhaling through the right (male) and left (female) nostrils. The regular and calm rhythm of the breath is therefore an important tool for conscious control of our emotions and thoughts and deepening of spiritual awareness.

Disorders at the Level of Ojas, Tejas and Prana

All three substances (prana, tejas, ojas) have also their seat in the heart chakra and at the same time permeate the whole body and mind. If the vata dosha deviates, the ojas begins to dry out too much, weight loss occurs and chronic fatigue syndrome develops.

In the case of a highly elevated pitta dosha, tejas may increase, which can literally burn the immune system. In this case, serious, so called autoimmune diseases develop, in which the body's cells begin to produce antibodies that destroy seemingly healthy cells, as it is the case of Bechter's or Crohn's disease, gout, rheumatic fever, multiple sclerosis, psoriasis, dermatitis or Reynaud's syndrome.

If the flow of ojas is blocked due to the accumulated kapha dosha, feelings of numbness, heaviness in the limbs, joint swelling or lipomas appear, along with the development of diabetes, obesity, high cholesterol and blood pressure appear. Glaucoma can also occur.

For a healthy immunity, the strength and balance of the subtle energies of prana, tejas and ojas is as important as our individual balance of vata, pitta and kapha. The healthy state of these essential energies allows the body to face adverse effects on a physical and mental level, while constantly rejuvenating individual tissues and their physiological functions and contributing to longevity.

The traditional Ayurvedic preparation Chyawanprash, an herbal elixir based on the celestial fruit Amla or Amalaki, clarified butter (ghee), honey and dozens of Ayurvedic herbs, which are added to the mixture at various stages of preparation, helps to restore and regenerate these three life energies. Further it is milk, ghee, honey, saffron, rice, almonds, raisins and asparagus.

Chyawanprash is a nutritional herbal jam that is in Ayurvedic medicine known as the "elixir of life" for its revitalizing effects. It is composed of a unique combination of herbs, which with their antioxidant properties benefit gastrointestinal health, optimal functioning of the immune system and the complex vitality of the body tissues. 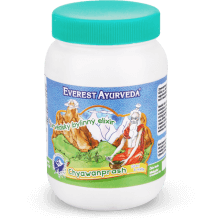 An old legend says that in ancient times, the sage Chyawan restored his youth and good health by consuming Amalaki fruit in combination with other herbs and then lived to a very old age. Thus was created this exceptional herbal elixir, which was named Chyawanprash. 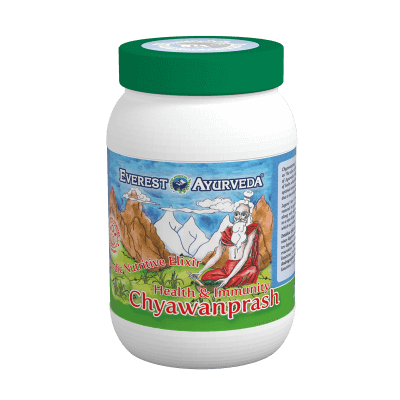 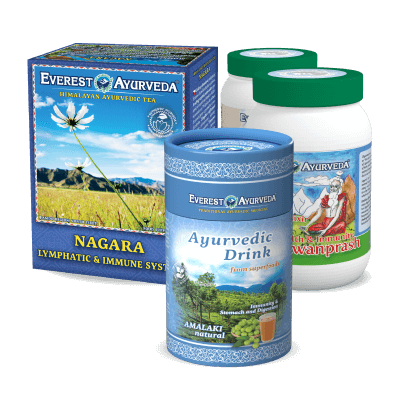 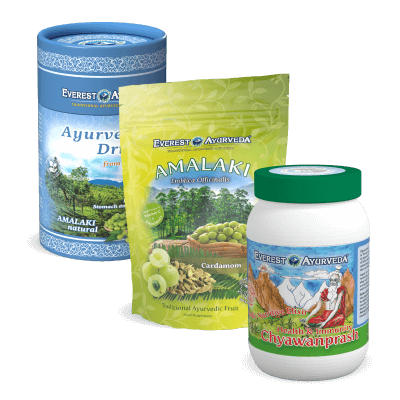 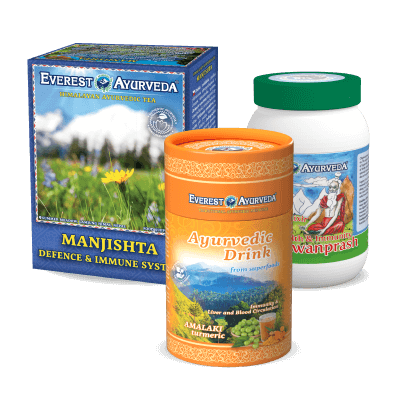 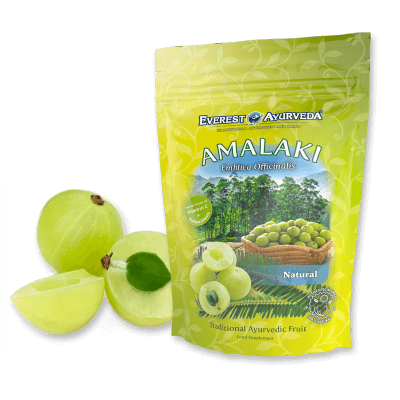 I started using the Brahmi tea after I stopped the anti seizure medication (as it made me unable to study) The Brahmi tea helped calm the pinching that would happen where my calcified lesion is in my brain. I’m currently writing my thesis and will be done end of July.

The teas are great. I use them for urinary disorders. No need for antibiotics. Thank you.

I have a pollen allergy. I undertook a 7 year long treatment on imunology, but nothing happened. I started to drink Dalchini and after two days all symptoms were gone. I don't know if it can be a miracle, but I think so :)

Hello, ASWAGANDHA tea really helped me with my sleep problems. I can hardly remember such a long and uninterrupted sleep. Thanks.

I know your products. I have just bought your cold tea and high blood pressure tea. They taste great and I want to keep using and buying them. It is really pure nature.

I recommend Pachaka tea. I have been suffering from a pain under my left rib - stomach or spleen problem. After a few days' use, the pain was gone. The effect is amazing. Now I am trying Bhringaraj for hair.

I suffered from rental colic. Antibiotics did not work. Only after regular use of Varuna and diet adjustment, my problems disappeared. It helped also my partner who had an urinary tract inflammation. I thank you on behalf of us two!!

Hello. I am very happy with your teas. I have tried several of them and all of them were super. Thanks

Hi there, I tried your himalayan liver tea (Kalamegha) in Switzerland at a workshop and love it.