Our spring cleansing series continues - after cleansing the lymph or blood and liver, this month we will focus on the digestive system, specifically the intestinal tract.

The stagnation of waste substances, which are not sufficiently absorbed by the intestines, results in their pollution and insufficient absorption of important nutrients and minerals, which then do not reach the necessary places. This can lead to joint and bone problems or allergic reactions in the form of rashes, itchy skin, hay fever or other symptomatic reactions to the presence of toxins that enter the bloodstream from the intestinal tract.

Contamination of the intestines and accumulation of waste products (ama) is caused by a weak digestive fire (agni), which slows down metabolism and thus does not take sufficient care to transform food. From the Ayurvedic point of view, this is especially true with kapha-type people, who, due to the ending winter and early spring, when kapha dosha predominates in nature, may feel slower digestion, or with vata-type people, who suffer generally from lack of heat and strong digestive fire.

To make your cleansing work, take one of the recommended treatments for 3 weeks, following the simple basic rules mentioned below. Then take a break for the 4th week and during the second month you can continue with another selection, which we will bring to you again in May in this detoxification series for the sequel.

The following recommended treatments are suitable for strengthening the digestive fire and targeted detoxification of the intestinal tract so as to restore their ability to properly digest and absorb important substances and minerals through the intestinal mucosa.

Choose from two options according to your own health condition and need:

Part of this treatment is the most proven Ayurvedic combination of three herbs amalaki, bibhitaki and haritaki, which is simply called triphala. You will take it in the form of a pleasant Ayurvedic Triphala tea together with other beneficial herbs such as turmeric, guduchi- stomach tonic and refreshing lemon grass, which makes the whole mixture more pleasant to taste and is not as bitter as the combination of the three herbs mentioned above.

Always use the Ayurvedic Chyawanprash elixir or the Purishaprash cleansing elixir on a teaspoon with your tea. Chyawanprash, another of the traditional Ayurvedic preparations, is known for its strong detoxifying effect mainly on the digestive system, but it also deeply regenerates the body and its immunity in the form of the subtle substance of Ojas. It also restores the immunity of the intestinal microflora.

Purishaprash cleansing elixir works on a similar basis, the contained combination of herbs then focuses mainly on the large intestine and regular defecation.

Allergy manifests itself on two levels - at the level of the digestive system and the upper respiratory tract. However, the primary cause of all allergies occurs inside the digestive system, where there is an inappropriate sensitivity to a certain substance - the so-called allergen (in the form of pollen, certain foods or animal fur). This is caused by impurities inside the gastrointestinal tract.

We therefore recommend that you first use a combination of Karavi tea, which focuses on cleansing the digestive tract in sensitive allergic people, with the Purishaprash cleansing elixir. This Ayurvedic treatment will help the body get rid of impurities that cause an allergy to break out when encountering an allergen. It is often associated with measles, hives and other types of eczema and rashes.

However, this package also includes the second possible combination of Dalchini tea and Pranaprash elixir, which focuses on allergic reactions affecting the respiratory tract such as hay fever, clogged cavities and sneezing along with burning or itching of the eyes.

"For years I have suffered from persistent allergies (dust, mites, pollens), which worsens every year. Every summer I have to endure constant sneezing, blowing my nose, red eyes and itching in my nose and ears. After a few days of using Dalchini and Karavi teas, I was extremely relieved, only the very minimum of the usual symptoms remained. And all without chemistry! I am very grateful for your teas and I will continue to use them. ”- Lukáš K.

Preparation and Use of Ayurvedic Detoxification Therapy

Always brew herbal tea for 3-5 minutes, it is much more effective than just leaching an herbal mixture poured with hot water. 1 teaspoon of the mixture is intended for 250 ml of water (one cup). But you can make a lot of tea to make it enough for the whole day. Always drink tea warm (you can store in a thermos). Dalchini tea is also very suitable for inhalation to relax and cleanse the nasal cavities.

All you have to do is take the herbal elixir on a teaspoon and eat it. Take 1 teaspoon 2-3 times a day with Ayurvedic tea to drink. It is always good to drink the elixir, so it is better absorbed. You can also drink it with warm water or vegetable milk. Unlike revitalization and regeneration treatments, we do not recommend cow's milk for cleansing.

Of course, the cleansing process in the body is aided by movement, which in itself has natural detoxifying effects. It contributes to a faster metabolism, when the intestines easier defecate.

It supports sweating and the excretion of harmful waste products from the body and oxygenates all cells, which are better able to get the necessary nutrients, but also prana - one of the three life energies (the other two are tejas and ojas), which maintains vital functions such as respiration, activity of the cardiovascular system and brain activity.

In the case of targeted cleansing, the most important time of day is the morning. Here are 3 basic steps you should follow after waking up:

During the therapy, we recommend easy running or fast walking at least 3 times a week. Go to bed before midnight.

During the detoxification treatment, leave meat and dairy foods off the diet. If you are used to them, try to significantly reduce their consumption - this in itself will be a relief for the body. Also try to limit the supply of chocolate, cookies and sweets with white sugar. Replace these delicacies with fresh ones, or dried fruit without preservatives, unsalted nuts and fresh vegetables. Also keep a sufficient supply of clean water and omit coffee from drinks or replace it with a healthier alternative.

The cleansing process can bring about temporary side effects such as headaches, tiredness and limb heaviness. An uncomfortable feeling is associated with the excretion of toxins from the body. However, if you persevere, the cleansing treatment together with exercise and a light fresh diet will bring you more energy and firmer health.

We are preparing two more thematic cleansing treatments for May, from which you will be able to choose and continue to the last level. May your purification continue succesfully! 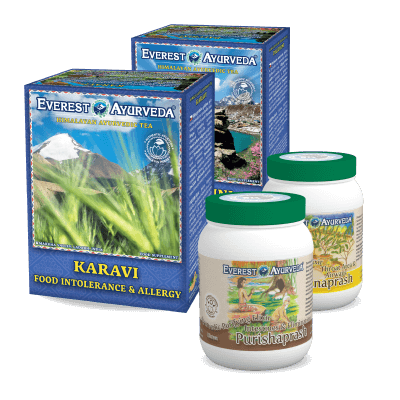 For a long time I suffered from intestine spasms accompanied by a loud belly rumbling. I attended a traditional medicine doctor`s office, where I was recommended GUDUCHI tea. After one month of using the trouble almost disappeared.GUDUCHI

I highly recommend tea for sleep ASHWAGANDHA. I was almost desperate, each second day without sleep. ASHWAGANDHA worked immediately and helped me very much. It was more effective than calming pills!ASHWAGANDHA

I can only recommend your products. I have more types of tea, I have already used two elixirs for eyes. I am currently taking one for immunity and I still have a hair elixir waiting for me. I won those two in your quiz :) hot drinks are also excellent. I will continue to buy your products. I wish you a lot of success :)NAYANAPRASHKESHAPRASHAMLA drink NATURALAMLA drink MORINGAAMLA drink ASHWAGANDHAAMLA drink TURMERICAMLA drink SPIRULINAAMLA drink SHILAJIT MUMIOAMLA drink YOUNG BARLEYAMLA drink GINGERAMLA drink ROSEAMLA drink LOTUSAMLA drink SHATAVARI

Have a nice day, thank you :). The teas are really amazing and most importantly - they help !!!! After a week of honest drinking, the first quality result. It was my last rescue ....DHANYAKA

NIMBA tea helped me with itchy eczema. I highly recommend!!!NIMBA

Hello, I have been using your tea for a long time and I think they really help me with all possible troubles :) Thank you and I wish you a nice day.SHATAPUSHPIHIMALAYAN RECREATION

Hello, I am using now your BRAHMI tea-memory and KALAMEGHA tea-liver and I am very pleased with them. The herb combination in your teas is a pleasure also for the soul. Thank you.BRAHMIKALAMEGHA

Good morning, I thank you for your teas which are very beneficial and effective. I often recommend them to my patients and use them myself.HARMONY ELIXIR