Spirulina is most often referred to as freshwater algae, but botanically it belongs to the blue cyanobacteria due to its color in direct sunlight. The best known species of spirulina is arthrospira platensis, which grows in tropical and subtropical lakes with high pH and carbonate concentrations in Africa, Asia and South America.

Spirulina has become one of the superfoods mainly due to its high content of minerals, proteins and vitamins such as B1, B2, B3, B6, B9, A, D, E, K and C. Proteins are needed for growth, regeneration, energy and longevity of cells. One study even suggests that a gram of spirulina contains more protein than a gram of meat. Spirulina is rich in gamma-linolenic acid (GLA), which has antioxidant effects and optimizes brain and heart function, as well as easily absorbed nutrients such as carotene, chlorophyll, phycocyanin, cell salts, plant nutrients and enzymes. Among the health beneficial metals, its composition includes manganese, zinc, copper, selenium and chromium.

At the same time, the beneficial effects of spirulina are mainly used to strengthen the immune system and overall vitality of vegetarian and vegan diets, to support muscle growth and normalize blood sugar levels. It also helps with weight loss and weight control. It contains iron, which contributes to the formation of red blood cells and the transfer of oxygen to body tissues, copper, which helps with the transfer of iron in the bloodstream, riboflavin, which promotes iron metabolism, and thiamine, which promotes cardiac activity.

Spirulina as a Cosmic Diet

Due to its high content of proteins, minerals and vitamins, spirulina was scientifically researched in the 20th century as a potential alternative source of nutrition for human life. In 1974, at the 1st World Food Conference, spirulina was even named "the best food of the future". Scientific studies have subsequently shown its positive effect on the treatment of many diseases, such as leukemia, diabetes, herpes, flu and radiation protection. Given its all-round positive effects, it is not surprising that it has been included in a strictly selected list of medical and food products in NASA (National Aeronautics and Space Administration) menus for space station crews.

How to Take Spirulina

Spirulina is available mainly in tablets or in the form of a ground powder, in Ayurveda called churna, which is consumed mixed in warm water with honey. If you would like to try the effects of spirulina - strengthen your immunity, clear your body of toxins and support your muscles and slim line - you can try our unique combination of ground spirulina powder with Ayurvedic amla fruit rich in vitamin C, which we offer in 100% natural and RAW quality. 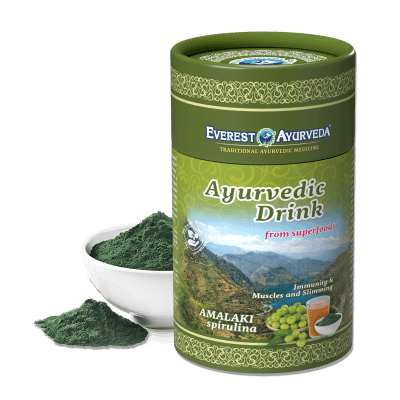 I am 50 years old and I am in perimenopause. I have noticed menstrual changes accompanied by some physical and sometimes emotional discomfort. I started drinking ASHOKA tea and I feel better and more balanced because menstruation, although irregular, now flows more naturally and with fewer additional symptoms. I also experience less mood swings. I am very grateful for that!ASHOKA

I am a medical doctor in Prague, Czech Republic. I work at a university hospital. Thanks to Everest Ayurveda company I had the opportunity to see or to hear of almost miraculous effects that your herb mixtures may have in some cases.GOTU KOLAAMLA drink ROSEAMLA drink LOTUSAMLA drink SHATAVARIMANOPRASHMUTRAPRASH

I bought KODAMA – Samurai secret incense sticks in your teashop and I must say it was the most fantastic fragrance I have ever smelt in my life.KODAMA

Hello, I have been using your tea for a long time and I think they really help me with all possible troubles :) Thank you and I wish you a nice day.SHATAPUSHPIHIMALAYAN RECREATION

The TULSI tea was very helpful during cold, after two days of drinking the tea, the sore throat dissapeared. Its taste is great and has an amazing warming effect. I recommend to have enough of it in the winter time!

Hello, I have been drinking tea from Everest Ayurveda for several years now, it has helped me with my period and general problems associated with hormonal imbalances. Now I'm ordering more teas and we'll see how it affects me :-)APANA

Good morning. I bought your NIMBA tea for acne, which got much worse because of stress. After two month of drinking this herbal blend I completely got rid of the acne on my face. In addition, my menstruation pain reduced.NIMBA

I highly recommend tea for sleep ASHWAGANDHA. I was almost desperate, each second day without sleep. ASHWAGANDHA worked immediately and helped me very much. It was more effective than calming pills!ASHWAGANDHA