"Divine Health" is what, literally translated from ancient Ayurvedic texts, brings to the body a drink prepared from finely ground Amla powder and the legendary root of Indian Ginseng or Ashwagandha.

For Ayurvedic physicians, these writings serve as an important source of valid and centuries-old knowledge. A healthy drink should also strengthen the immune system, physical condition and mental balance when used regularly.

These recipes and instructions for restoring and maintaining health and vitality, along with prolonging life expectancy, were written more than 2,500 years ago. Their quotations and translations then appeared both in the writings of Arab medicine and in the work of Hippocrates and Plato written several centuries BC.

The Origin of Ayurveda and its Influence on Allopathic Medicine

The deep knowledge from which Ayurveda arose was first revealed by enlightened sages, yogis, and saints who gathered sometime in the 7th century BC in the foothills of the Himalayas to form the first "scientific council" in human history. A record of this encounter can be found in one of the two most famous Ayurvedic writings in the Caraka Samhita.

The extensive Ayurvedic treasury of scholarly writings then contains over 8,000 recipes for various treatments using around 600 herbs. Based on the knowledge about the health benefits of many of these Ayurvedic plants, pharmaceutical companies have developed products applied in modern medicine. For example, the plant Rauwolfia serpentina, which has been used for centuries to lower blood pressure. In 1931, reserpine and rescinamine were isolated from this plant, and in 1945, the first allopathic drug to lower blood pressure was developed. We would find many such examples.

Finely ground amla powder, the main ingredient in Ayurvedic drinks, is a small miracle due to its high content of antioxidants and vitamin C. In its fresh form it looks like a larger gooseberry and ripens year after year in small trees under the hot sun of northwest India, Gujarat and Rajasthan, near the borders of which Alexander the Great stopped in the first half of the 4th century BC with his war expedition, then already as the ruler of Greece, Persia and all countries up to the Indian subcontinent.

Legend has it that at the far point of his journey he met a group of sages who meditated under a large banyan tree. His discussion with them impressed him so much that he turned around and returned with his tired army from where he had come. Gujarat is a land of worshipers of Mahavira's Jainist teachings on nonviolence, while the proud people of Rajasthan excel in their indomitable courage to defend their territory to the last man, as evidenced by many historical stories of ancient India. In both countries, there is a long tradition of hand-picking and processing amla fruit and other medicinal herbs for use in many Ayurvedic recipes.

Near this area is also the famous Taj Mahal, whose graceful architectural curves reflected on the water surface carry the human mind into the world of palaces and temples and create an exceptional atmosphere of noble spirituality of the whole area. King Shah Jahan erected this magnificent monument in Agra in honor of his late wife, Mumtaz Mahal, the "pearl of the palace," as a symbol of beauty and eternal love for pilgrims around the world.

The Ayurvedic hot drink Amla with Ashwagandha is one of eleven types of Ayurvedic drinks prepared from so-called "superfoods", exceptional natural products high in nutrients, vitamins, minerals, enzymes and antioxidants. Many of these modern foods have a deep tradition of use in natural medicine systems around the world. They support the immune system, detoxify the body, lower cholesterol and overweight. Based on their adaptogenic effects, they significantly contribute to regeneration, vitality and good physical and mental health. They limit the activity of free radicals and the aging process of body tissues. They strengthen the healing processes in the body and increase resistance to stress factors and nervous tension. 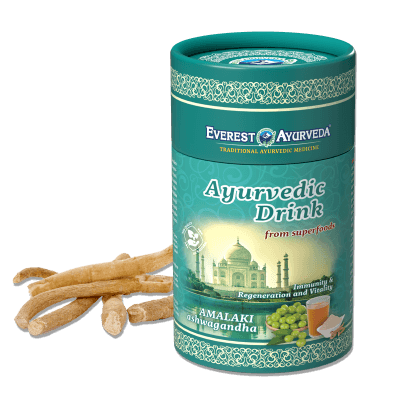 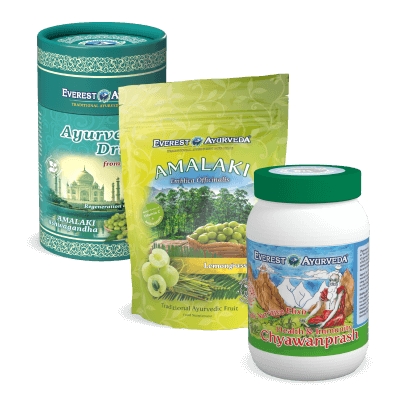 Hello, a month ago I brought VIDANGA- Slim tea from my vacation and I am very happy with it. After a few weeks I lost 3 kilograms.

The Tulsi tea was very helpful during cold, after two days of drinking the tea, the sore throat dissapeared. Its taste is great and has an amazing warming effect. I recommend to have enough of it in the winter time!

We talked about my surgery and you recommended me Nimba tea. I finished two packages. Though I had to undergo the surgery, the tea helped to cleanse my blood and the after surgery examination turned out very well.

Hello, I bought your Ranjaka tea and it is doing me good (for fatigue and irritation). Thanks

I have a pollen allergy. I undertook a 7 year long treatment on imunology, but nothing happened. I started to drink Dalchini and after two days all symptoms were gone. I don't know if it can be a miracle, but I think so :)

I have been drinking Karavi for two weeks already, I feel better, it helps.

Hello, my spine really bothers me, severe pain. A month of infusion and pills with no positive results. Now I am using GOKSHURA and I still have not taken single pill. THANK YOU for each day that does not hurt. Regards

Hello, I regularly buy teas from your offer (Kudzu, Brahmi) and I am very satisfied with them. Regards

Dear Sirs, my father applies therapy with Your diabetes tea, and results are very, very good (3,8). Thank You.